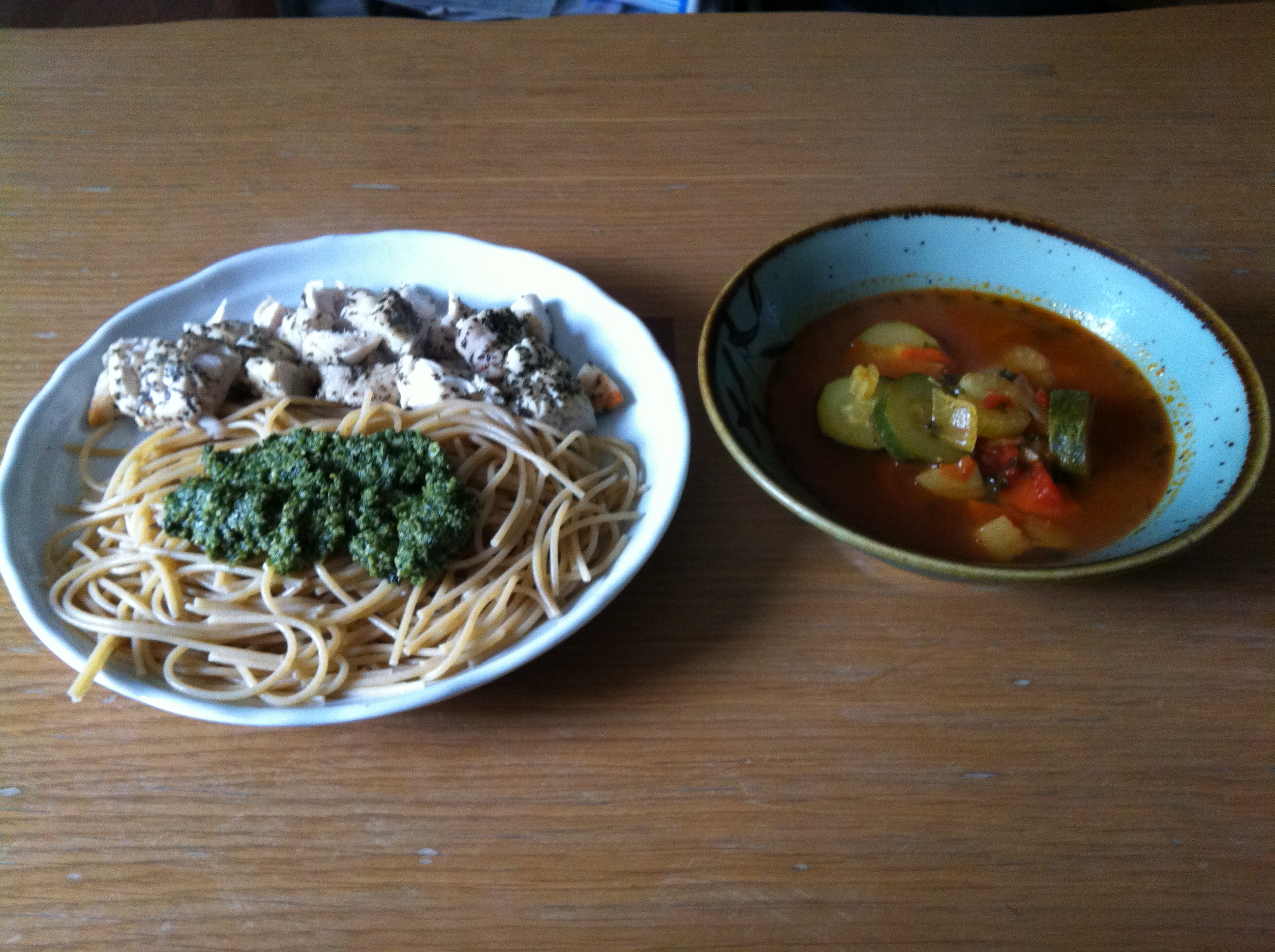 The temperature is dropping and fall is in full swing here and Japan. I wish the weather would stay like this forever. This three-day weekend marked the anniversary of the founding of this prefecture, Gunma, so I decided to try my hand at something I’ve never made before.

First let’s talk about the pesto that tops the whole wheat pasta. It’s been about 3 years since I’ve set foot on my native soil in America and it’s probably been much longer since I’ve had pesto. I think I got the flavors right, but I wasn’t sure if the consistency should be a bit thinner. The pesto was quite easy and fun to make. I ripped fresh basil leaves off the stalk (die die die) and packed it in the food processor (die die die) leaving just enough room for 3 cloves of garlic and a handful of pine nuts. I pulsed it for a bit (die die die die) then I slowly added extra virgin olive oil a few tablespoons at a time and I continued to blend until the mixture became smooth.

Next the chicken breast tenders. I marinated them in extra virgin olive oil and Italian seasoning while I made the soup. When the soup was completed I broiled the chicken tenders about 5mins on each side.

Now the veggie soup. This was my first attempt at the soup and I made A LOT. Which I divided into 6 portions and stored in my freezer. I started with about 7 cups of low sodium chicken broth, 2 red potatoes cut into 1″ cubes, 1 medium carrot cut into thin quarter moons, half a medium yellow onion diced, and 1 cup of sliced celery. I brought the ingredients to a boil then reduced the heat to medium and covered until the potatoes began to get tender.

Then I added 2 cups of sliced zucchini, 1/2 cup of chopped fresh parsley, 4 cloves of chopped garlic, 1/2 cup of tomato sauce, and 1 limo pepper for a little heat. I brought the soup back up to a boil then reduced to a simmer until the zucchini was tender. I seasoned with only a bit of black pepper, there was enough heat from the limo pepper, and a pinch of salt.