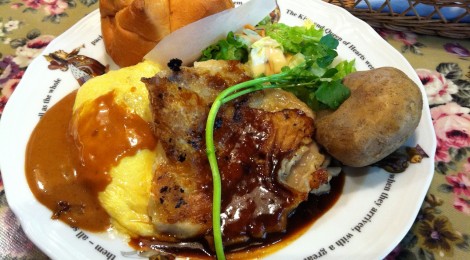 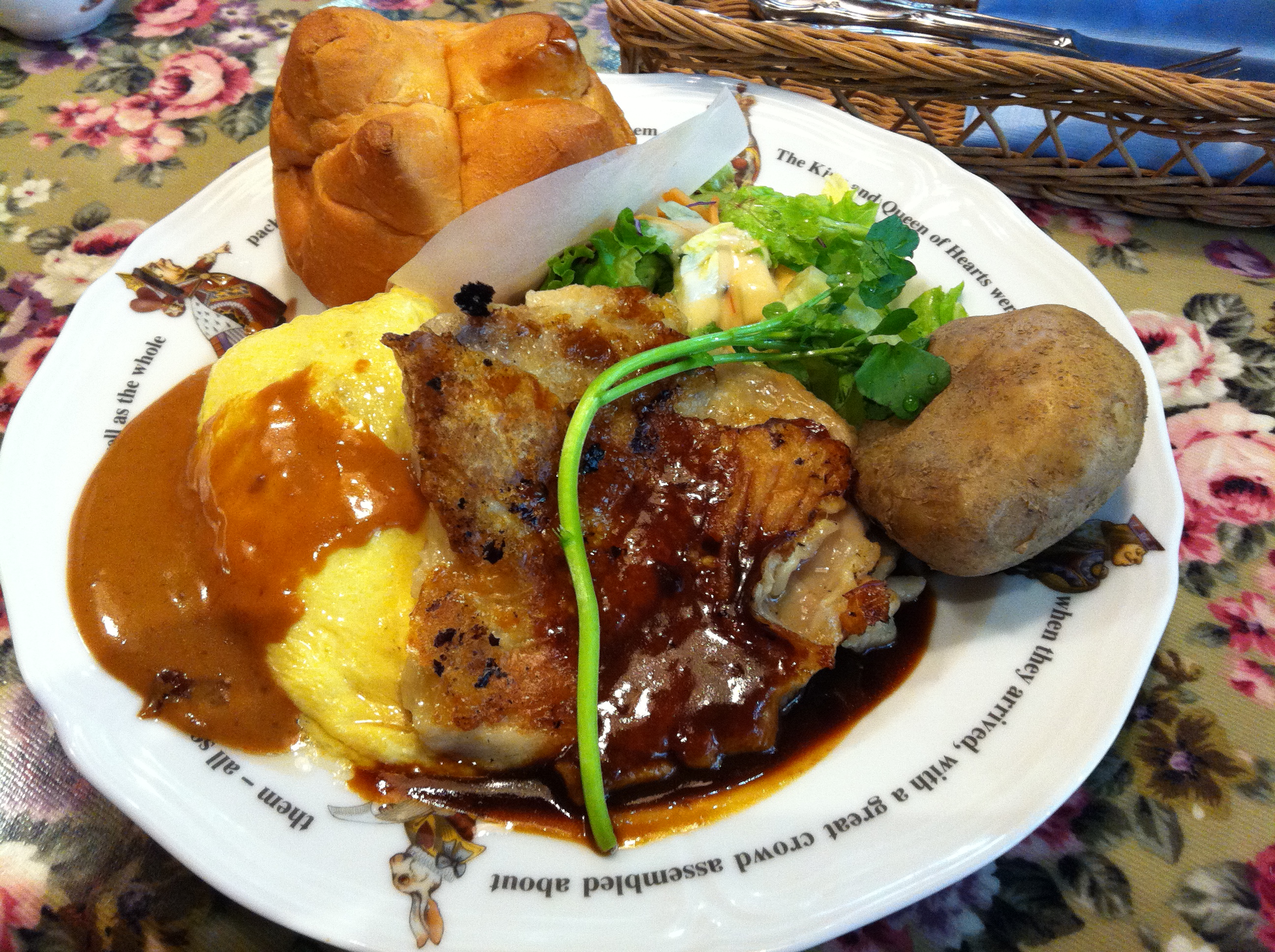 I decided to spend last Friday taking advantage of all the sales at Aeon Mall, mainly to buy presents for my family. After a bit of shopping I decided to hit the food court, but after being stalked by a group of my curious 9th grade boys; I abandoned the food court idea and decided to go to the restaurant area. After much debate with Luciables who helped me narrow it down to steak or omurice.

I decided on the omurice restaurant Rakeru. The restaurant had a country French motif. Or at least with Japan’s fascination with Disney what Belle’s restaurant would look like if she ever opened one.

Starting from the top clockwise is the bread, fresh baked and amazing with french butter. At first glance I was expecting the bread to be hearty with a thick chewy crust, but as soon as I picked it up the opposite was true. The bread was super fluffy and soft like the stuff dreams are made out of. I don’t have much to say about the french butter other than, I guess french butter has no salt.

Next is the green salad. This was probably the weakest part of the meal. It was as if the restaurant just used bagged salad bought a few stores down at the super market and they merely showered it with the crappy dressing that was on sale that week.

The potato is next. After getting my meal a few things became very apparent about the potato; first I might be a spoiled American expecting, salt, pepper, butter, sour cream, chives, bacon bits and the like, for my potato. Second this is just how it’s served in France…unlikely. Third the Japanese have no idea how to properly serve a baked potato. I was given just a plain hot potato, I was seriously confused for a few minutes and even considered the fact that I may be on some strange Japanese TV show messing with foreigners in restaurants. As I looked at the other patrons plates I noticed they were just eating the potato plain. There’s nothing more to be said about the potato other than give me condiments bitches.

Chicken steak. I was actually more excited about the chicken steak than I was about the omurice. Let’s get the bad news over with first. I don’t know what it is about Japan and liking dark meat and the fatty parts of meat, but I’d have to say there was more fat and tendon in the chicken steak, than actual chicken. During and after I had to wipe my mouth repeatedly because it was just covered in oil. I’m sure at one point my lips were so greasy it probably looked as though my lip gloss was poppin’ and I was expecting women in the restaurant to ask me which brand of lip gloss I use to get my lips looking that way. To which my answer would be, just order the chicken steak. Now the good news It was perfectly cooked and just had a hint of seasoning to bring the chicken flavor out. The gravy on the chicken was also delicious.

Omurice. I was expecting the traditional omurice with chicken rice and ketchup inside, but this restaurant threw me a curve ball. This omurice was stuffed with an amazing chicken fried rice. It was as though they took all the good parts of the chicken steak and fried that with rice. The gravy was also amazing it complimented the flavors of rice stuffing in the omelet.

I’d have to say overall I was pleased with the food. I will surely go again, but I will not order the chicken steak or salad. I will stick to omurice only of which there is a huge variety.