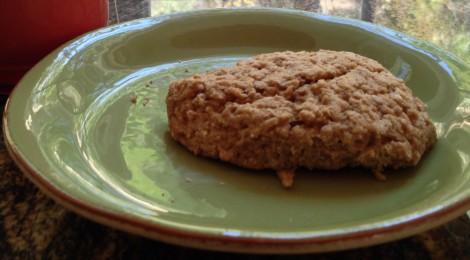 I’m staying at Garrett’s aunt’s house in Yosemite, exploring her wonderfully thoughtful house, reading the notes she leaves to all the people who stay here. Even though I’ve never met her, seeing how her home is provisioned and how carefully she thinks of her guests makes me like her instantly. I also absolutely covet her large kitchen island butcher block. In her words, “The butcher block island is a cutting board. Cut on it, spill on it, use it. That’s what it’s there for.” 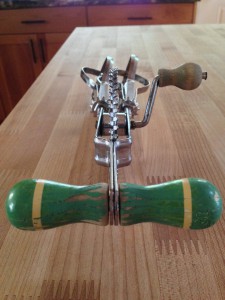 I’ve been poking through her pantry, opening drawers and cabinets and just being delighted at what I find. And let’s face it, when you find something as awesome as this hand-crank eggbeater, how can you NOT be enticed to make something using it. Inspired by all the gorgeousness around me that I probably won’t be able to afford for another ten years, I’ve decided to make buttery light scones to have with tea in true British fashion.

When Garrett gets up, I’m hoping he’ll join me in sharing just one. 😀

The original recipe for these brown sugar cinnamon scones came from the awesome Kitchen Treaty!  I was surprised by how short the ingredient list was – just flour, baking powder, brown sugar, butter, cinnamon, salt, heavy cream, vanilla and an egg!

The instructions Kitchen Treaty provided were pretty much perfect, so I’m just going to enumerate what I did differently here, along with a quick tip on cutting in that butter. 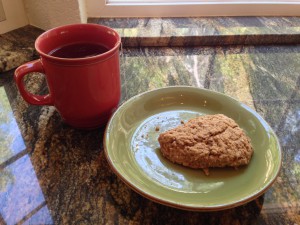 What I Did Different!

Buttery Quick Tip: Grate cold/frozen butter instead of cubing it. You end up with uniformly thick long strings of butter that are easy to incorporate into the flour and sugar mix. It’s also kinda fun to do because the butter ends up looking like spaghetti. I used a pastry cutter to mash it all together.

These scones are wonderfully tender with just the right amount of sweetness. Give them a try!