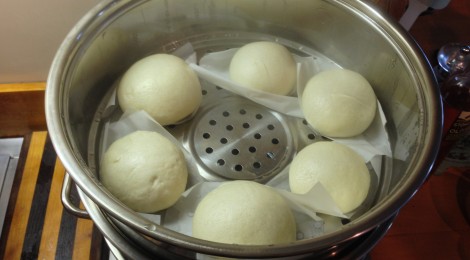 How to Make Mantou (Chinese Steamed Buns) with Eleanor

Since I’m still on a bread-making kick, I really wanted to make mantou, or Chinese steamed bread. I love the bread’s QQ (chewy) texture, and its slight sweetness. Eleanor’s mom makes them often, so Eleanor and I decided to try to make some ourselves.

When Eleanor asked her mom for the recipe, her mom’s instant reaction was: It’s really hard. It’s an expected fail. Why don’t I just make some for you guys? Better yet, you can just get them from the grocery store.

To which we responded: … CHALLENGE ACCEPTED. 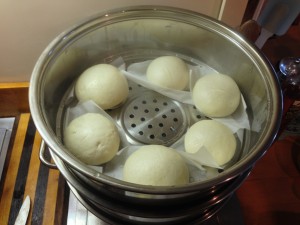 …how do you think we did?

I bloomed the yeast just to check that the yeast was still alive, though the recipe I was following doesn’t call for that. The original recipe just says to layer the ingredients in the order listed further down and then mix in a mixer. I also didn’t have a mixer – a wooden spoon works just fine. 😀

Warm 1/4 cup of milk in microwave (no more than 110 degrees F), add 2 pinches of sugar and the yeast, then let it foam! This usually takes around 10 minutes, and when it’s done blooming, the foam should be the same consistency as what you’d get on a nice, steamy cafe latte.

1. Sift the flour into a large mixing bowl, and create a well in the flour.

2. Add 1/4 cup of sugar and baking powder to the center of the well

3. Add the bloomed yeast to the mixing bowl with the remaining milk. Add the soft butter.

4. Combine it all with a wooden spoon, then knead until smooth. It took me about 20-30 minutes.

5. Grease the mixing bowl and the top of the dough ball, and then cover the ball with saran wrap/clean kitchen towel (so the dough doesn’t stick to anything as it rises).

6. Let the dough rise in a warm spot until doubled in size, which takes about an hour.

7. Punch down the dough, then set it aside to rise again for 20 minutes.

8. Start water boiling in the metal steamer, or any type of steamer you have handy.

9. Form the dough into individual buns. We made about 16 small ones. I formed the dough into little balls by flattening a piece of dough and folding it in on itself, but that ended up interfering with the uniformity of the inside texture a bit. I think rolling the dough into a log and then slicing it into portions would work better. 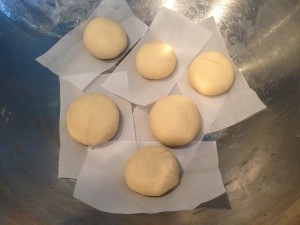 10. Place each doughball on a square of parchment paper. The buns will expand a bit in the steamer, so make sure to leave some extra room.

12. Remove from steamer with a pair of chopsticks. That is the Asian way.

How do I know there’s enough water/flour?

My mom (and Eleanor’s mom…it must be an ancient Chinese secret) say that you know you have just the right amount of flour/water when the dough doesn’t stick to your hands. By the time you’re done kneading, there should also be no trace amounts of flour left in the mixing bowl – the bowl should be completely clean.

How do I know when I’m done kneading?

I’d always heard that you can tell when you’re done kneading when the consistency of the dough changes – it turns from slightly grainy to extremely smooth, like a baby’s bottom. 😀 Other methods to check include pressing on the dough lightly with your thumb – if the dough bounces back you’re done. The other way, which I like, is to break off a small piece of bread, and then stretch it slowly while holding it up to some light. If the dough stretches to the point where you can see light through it before it breaks, then that means the gluten has developed fully and you’re done kneading.

Where’s the best place to let the dough rise?

My house tends to be pretty cold since the heater isn’t on, so I keep it in an oven with the light on. My mom also says you can preheat the oven to 200 degrees, which is apparently prime proofing temperature.

I’m going to keep playing with the recipe – blooming/not blooming, shaping in different ways – and hopefully find something that works best for me. If you have any suggestions, please weigh in!